Every webpage emits carbon-dioxide (CO2), because they run on servers, which are powered by electricity. And electricity is produced by power plants that generate power by burning fossil energy resources (coal, crude oil and natural gas)! Alex Wissner-Gross, a Harvard University physician raised the issue of the environmental effects of the individual’s Internet use. According to his study that was done in 2009 even a simple web-search emits Carbon-dioxide, which – as we all know – results in the production of Greenhouse gases. This largely contributes, on the one hand, to the changes in the climate, which is characterized by extremes, and on the other hand, to global warming.
Based on the physician’s measurements, for example, an average search on Google generates 7 grams of CO2, while boiling a kettle of water generates 15 grams of CO2. Although, the latter does not really need to be commented on,  in the case of the former, not all of us are aware of the fact, that upon entering a search, Google collects the data from servers that can be located even thousands of kilometers away, which makes the process really fast, but also consumes a lot of energy.

Since, we run over an average of 200 million searches a day, our daily energy consumption, together with the amount of the emission of Carbon-dioxide caused by this, is equal to the total consumption of the airline companies of the world, which adds up to 2% of the world’s total CO2 emission.

Visiting an average web page results in the emission of 0,02 grams of CO2 per second, whilst of a page that has pictures and videos as well can have an emission of ten-fold higher than that.

The storage of a so-called avatar, – a picture that is shared on forums and blogs by users who are trying to visually identify themselves – annually accounts for 1700 kilowatt hours of energy consumption.

We use the following methods in order to calculate the footprint of the webpages’ operation:

Furthermore, in case of professional sites, 20% of the visitors does not spend more than 7 seconds browsing the web page, and the other 80% does not spend more than an average of 5 minutes browsing the site. The situation is reversed in case of non-professional web pages. The electricity consumption of the network can be derived from the value equal to the transfer and distributional loss of electricity, which is 10% of the total consumption on both sides.

(Source of the value: Electric power transmission and distribution losses (% of output))

The value used for the calculation, and the average consumption of the computer used by the visitors for browsing the webpages is 200W. 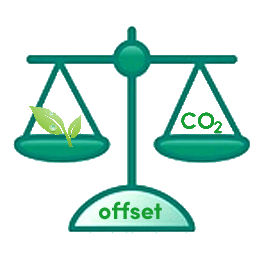 The Carbon offsetting of webpages can be done by supporting so-called Green Projects. These already accomplished projects are producing products or execute their services in a way that they either barely emit Carbon-dioxide – or any gases that boosts the Greenhouse effect – or do not emit these gases at all.
Our business has all the rights that allow us – on a verifiable way – to support these projects and to utilize the already purchased units for offsetting the harmful gases generated by webpages.

You can resort to our service here.